The end of the line for bluefin?

Posted on February 3, 2015 by Abigail McQuatters-Gollop

As a vegetarian, I am interested in the conflict between eating something because it tastes good and knowing that animals suffer due to to cruel farming practices, species are harvested by environmentally devastating means, or a food species is endangered. I am also a marine scientist, however, and always up for seeing cool marine species. In 2012 I visited Tsukiji fish market in Tokyo, Japan. It was an amazing, fascinating experience and I was floored by 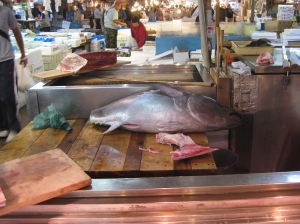 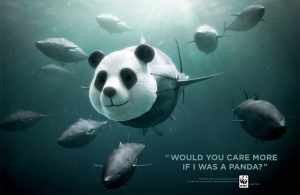 the number of bluefin tuna for sale. I was insanely excited (guiltily, so) to see a fish which I knew is endangered and which I knew was being sold for food in a way which was completely unsustainable. Why was I so excited? Well, bluefin is legendary, especially that which is sold at Tsukiji fish market where bluefin tuna are sold at auction for thousands, or even tens of thousands (!), of pounds. As I walked around the market, stepping around bluefin carcasses longer than I am tall, I kept thinking ‘Surely everyone knows blue fin is endangered, right?’.  And as I encounter bluefin on menus across Japan, and, less frequently, in the UK or USA I always think ‘Everyone knows bluefin is endangered, right?’. If they are endangered, and everyone knows it, how can so many people, especially fisheries scientists, eat bluefin tuna?

When I returned to Japan in 2014 I asked some Japanese fisheries scientists why they still eat bluefin tuna when it’s well known the species is endangered, and they replied ‘It tastes good’. Today I found what I suspect is a second answer to that question. In a recent blog post by Bruce Buschel, he perfectly described what it’s like to visit the world’s largest fish market, the fate of Tsukiji, and how these things are entwined with the future of endangered bluefin. The post ends with this quote, which reminded me of my experiences at the fish market and my time asking awkward questions of Japanese fisheries scientists:

Back in the USA, I go out for a late-night snack with a chef friend to compare notes on Japan. The owner of a local bistro recognizes the chef and corners him. “Tell me something, chef. Why are customers giving me a hard time for serving bluefin tuna?” The chef gently lays out the statistics about the endangered creature. The owner listens, scratches his head, and then delivers a one-liner worthy of Yogi Berra: “If there’s such a shortage of tuna, how come I see it everywhere?”

Check out Buschel’s excellent blog about the fate of Tsukiji fish market and bluefin tuna: https://medium.com/gone/witnessing-the-last-days-of-blue-fin-tuna-at-the-tokyo-fish-market-4575ff0e7028 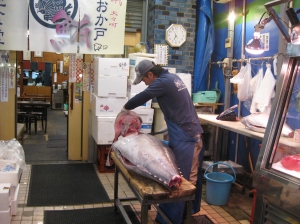 Breaking down bluefin at Tsukiji 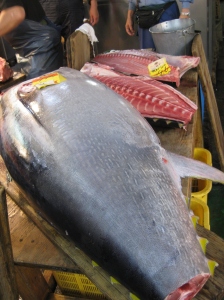 4 Responses to The end of the line for bluefin?