Posted on September 19, 2014 by Abigail McQuatters-Gollop

So have we all recovered from Challenger 2014?

For those of you who didn’t attend, the 16th biannual Challenger Conference for Marine Science was held in Plymouth last week. It was a fantastic week full of research talks, posters, stimulating discussions and drinking networking.

The highlight of my week (besides the conference dinner and 80s flashback disco!) was definitely the marine policy session, which I chaired for the second time. Before my involvement with Challenger began in 2012, to my knowledge the Challenger conference had never featured a marine policy session. In 2012 the policy session was small featuring only a few speakers and attended by about 30 delegates. This year’s session, entitled “Marine Policy – Challenges and Tools for Managing Marine and Coastal Resources”, attracted so many oral abstract applications that some had to be relegated to poster presentations. About 100 delegates attended the session and we had a line-up of eight speakers addressing a variety of policy and management-relevant topics.

Do we have the information we need for decision making?

The question of ‘do we have enough data to make a decision?’ was repeatedly addressed. Jacqueline Tweddle suggested that plankton abundance, composition and dynamics should be considered when selecting wind farm locations. In my opinion, it seems unlikely that wind farms will have much of an impact on plankton, but we might need information on plankton to help track wind farm-induced changes to higher trophic levels. It could even be a positive move to cite wind farms in highly productive areas, thereby protecting vulnerable species from fishing pressure. In her talk about data confidence in MPA site selection, Frances Peckett proposed that we need to make better use of existing data, but we should be clear about our confidence in the data. We can’t just wait until we have more data to construct conservation methods – we need to find a way to use what we’ve already collected. Jennifer Riley stated that uncertainty drives science but freezes the political decision making process. I agree – as we get more information we can change our management plans, but we have to act now if we want to achieve good environmental status – this is the basic principle of adaptive management.

So how much more data do we need? Richard Lampitt examined the strengths and weakness of ocean observing systems (there’s no perfect monitoring system!) and asked the important question ‘Does monitoring the ocean making it more valuable?’ In this time of economic strain, it is getting increasingly difficult to justify sustained ocean observations. Richard pointed out the recent Challenger special issue of Philsophical Transactions of the Royal Society on UK Sustained Observations as an illustration of the worth and range of application, both scientific and political, of time-series data. Nick Owens (SAHFOS) commented that funding for ocean obvs will be most successful if we can prove market value – a depressing, but true, sentiment. Marie Lise Schlappy spoke about the success of Reef Check Australia in training members of the public to voluntarily collect data on the state of Australian coral reefs – a cost effective route to collecting data. This is a stellar example of citizen science – Reef Check has a long time-series on coral health which has been used for assessment and is sensitive enough to detect change.

Lampitt stated that for policy we need knowledge, not just information, and policy makers need to be more willing to invest in people rather than just oceanographic equipment –humans are the ones that convert data into useful knowledge. In her talk Jennifer Skinner linked the importance of proper taxonomy, done by humans not by machines, to the construction of sensitive indicators for policy. While automated instruments can construct bulk plankton indicators (such as phytoplankton biomass from satellites), this information is no replacement for the detailed taxonomic information that can be gained from taxonomic analysis performed by humans. For the Marine Strategy Framework Directive (a major EU marine policy driver) implementation, the OSPAR and UK expert groups have based our policy indicators on species data which can only be obtained by trained taxonomists.  I do not understand why it can be easier to get financial support for shiny new tech than it is for a survey that has produced a consistent and well-cited 80 year biological time-series of data which continually produces policy-relevant science and evidence. If we can’t find a way to fund the next generation of taxonomists, those specialised skills will die out leaving us without the ability to provide the type of sensitive indicators needed for decision making.

How can we effectively communicate with stakeholders? 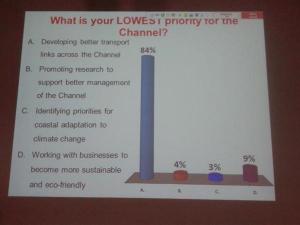 Science is interesting and fun, but what about getting that science used? Jennifer Riley gave an enlightening talk on the process through which science becomes policy evidence in the UK. She highlighted some of the barriers to effective communication with policy makers (such as differing priorities and time scales between scientists and policy makers, each group has its own jargon-filled language, scientists often don’t understand the policy landscape, the two groups have conflicting ideas on how funding should be spent). From the reactions in the room and on Twitter I could tell this was new information for many of the audience member which was fantastic.

Rebecca Shellock and Angela Carpenter delivered Challenger 2014’s only interactive session, which focused on research conducted as part of the INTERREG project Pegaseas. Each audience member was given a voting clicker and we all voted on English Channel-relevant management and use issues. We were then asked to vote on if our opinions, as scientists, would be similar to those of the public. In other words, do scientists have the same point of view as members of the public? The public was also asked this question, and like the Challenger scientists, thought that our views would differ. However – both groups were wrong and it turns out the public have remarkably similar opinions on use and management priorities for the Channel environment. How can we get the public to understand that scientists are themselves members of the public? I think this is a key issue and it’s our responsibility, as scientists, to deliver this message. Social media such as Twitter and Facebook, blogs such as this one, public outreach events, and school visits all play a role, but also citizen science – getting members of the public involved in collecting data can increase their personal investment in the marine environment.

Although it wasn’t part of Shellock and Carpenter’s initial talk, my colleague, Jason Hall-Spencer, and I asked for a special question to be included for voting: Will Scottish independence benefit the marine environment? The delegates’ results are below: 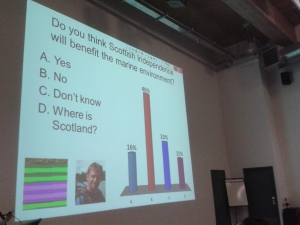 The controversial question – Jason (pictured) and I (pictured as a stripey box) couldn’t pass up the opportunity to gather opinion on this issue.

Looks like it’s good news for the Scottish marine environment then!

What was your favorite part of #Challenger2014?

If you couldn’t make it to the Marine Policy session, or if you want to relive the day, check out our Storify: https://storify.com/anaturalstate/challenger2014-marine-policy  (works best in Firefox or IE)